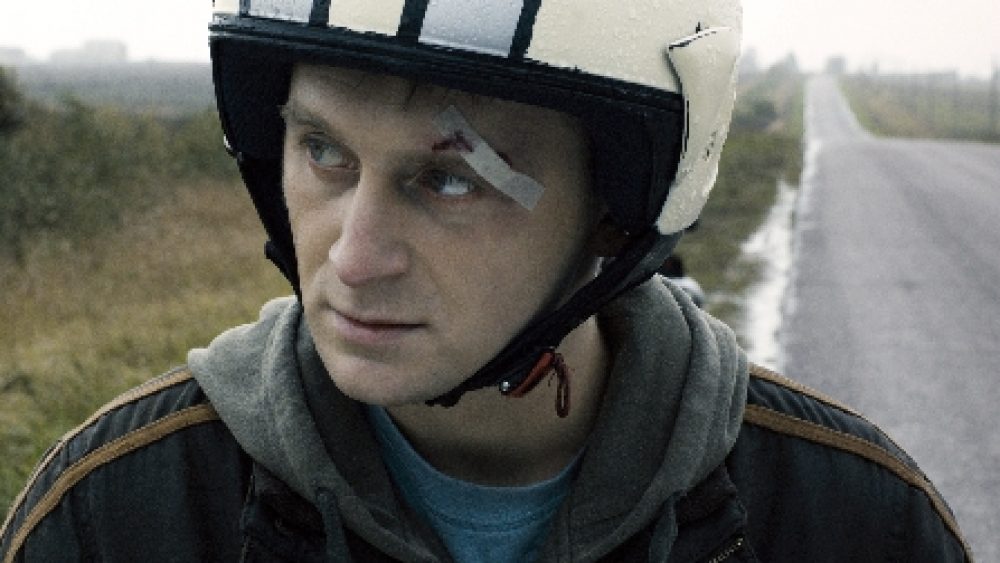 Donal Foreman checks in from Brooklyn to report on The Delivery Guy, in which pizza delivery guy Alex gets embroiled in a crime story in a Russia of rust, neglect, highways and fast food joints.

In the film industry, we talk about ‘deliverables’ (the finished movie) and ‘end users’ (viewers), but not so much about delivery itself. Instead we talk about movies ‘on demand’ — accessible instantly, delivery reduced to a rapid and wireless transfer of data. This is how I had the opportunity to see The Delivery Guy (Raznoschik), a film that takes as its protagonist the human embodiment of this fundamental stage of commercial trade.

It’s a practice that, philosopher Alain Badiou has argued, art must defiantly separate itself from. Rather than ‘circulate according to any pre-established network’, it should be ‘that which interrupts marketing, that which communicates nothing.’ Communication as Badiou employs it here seems to be exactly what network providers are talking about when they extol the virtues of staying ‘in touch’, not to touch on anything in particular but simply to ‘communicate’, to keep the circuits flowing, to ‘stay connected’. He calls it the Western imperative. He names as the ‘only problem’ the question of whether it can definitively be detached from the artistic imperative.

The Delivery Guy, to its credit, communicates very little — apart from narrating the empty shell of this circuitry itself. Alex, a pizza delivery guy, takes care of his ailing father in a world of diminishing prospects and soulless interactions. It’s a Russia of rust, neglect, highways and fast food joints, with no clear way out. Into this sepia-graded banality, Stempkovsky introduces a classic crime genre proposition. Intercepting a package intended for an absent pizza customer, Alex is given the opportunity to carry out a gangland hit for a large sum of money. But rather than this payoff being, in archetypal fashion, his ‘ticket out of here’, it’s instead his means to save his father, who will die of cancer without a costly operation. The way in which the subsequent murder is depicted makes clear its structural similarities to Alex’s day job. Both are deliveries in a certain sense, commercial transactions for which Alex is merely a conduit, with no real stake in its cause or its effect. Murdering someone he has never met before for someone he will never meet — alienated labor in a very pure sense.

The American short Transaction (2005, Jacques Thelemaque) observes the interaction between a prostitute and her client with a very simple formal conceit: leading up to the actual service that is being paid for, the camera only allows us to see the client; afterwards, we only see the prostitute. Formalizing both the symmetry of the act and its hollow, bare existence — it’s as if the two never really see each other, never really touch — Thelemaque also instrumentalizes the camera in this power dynamic, eschewing the grammar of the shot-reverse shot to place us inside the transaction, with a central and lengthy panning shot acting out the shift from one side of the sale to the other. With Transaction in mind, we can note this about The Delivery Guy: Stempkovsky’s camera is always outside the transaction, an alternately dispassionate or foreboding observer, but what takes the place of Thelemaque’s panning shot is the delivery guy himself. Alex is the vehicle of the transaction, neither the buyer, the seller nor the thing being sold; not a commodity in himself, just collateral damage in its circulation.

In addressing Stempkovsky’s measured, patient style — full of lengthy master shots and an attention to real time processes (making a delivery, eating a meal) — it’s tempting to situate the film amongst the cosmic visions of Tarkovksy, Sokurov or Tarr. Even accounting for the film’s more sterile, less poetic tendencies — Stempkovsky’s vistas, whether urban or rural, are always wintry, dumb and inert — one could argue its kinship with great European formalists such as Akerman or conceptual procedurals such as Police, Adjective (2009, Corneliu Porumboiu) and Bullet in the Head (2008, Jaime Rosales). Yet there is a narrative expediency here, a disinterest in texture, that seems to belie all of these comparisons. None of the above would deign to include a close-up of a text message or a news headline on a computer screen, artless cutaways that serve purely expositional ends. But Steven Soderbergh would… and The Delivery Guy also shares the steely and over-graded HD look of that director’s recent arthouse efforts.

While it seems unlikely that Stempkovsky has an Erin Brockovich or Ocean’s Eleven in him, his film shares with Soderbergh’s ‘small films’ (Bubble, Magic Mike, The Girlfriend Experience) an adoption of a fairly rigorous and distanced style and an implicit, well-observed social critique — while at the same time clinging on to certain narrative tropes that are thoroughly status quo. In Magic Mike for example, we get both an account of how, as critic Michael Sicinski has put it, bodies are ‘conditioned by monetary relations’ — and a by-the-numbers romance and morality tale.

Stempkovsky is, in fairness, a little more restrained in his equivocation. Alex’s potential love interest — the girlfriend of his obnoxious and odious cousin — remains a stubbornly hopeless prospect, and far from having Alex take the cash and run off into the sunset with the girl, Stempkovsky doesn’t even allow him to consider it. But he does choose to plug the narrative and emotional aporia that is opened up by the film’s central ‘murder-delivery’ with his troubled protagonist, nauseous with guilt, eventually confessing to the widow of the gangster he murdered. The repentant murderer — weak enough to carry out the act, but too decent to live with getting away with it — is a familiar trope. But in employing it here, Stempkovsky seems to be signifying an act of a different nature to what the rest of the film depicts; rather than a submissive, automated, transactional act, we have an individual, honest one.

Up until this point, the film’s structure almost seemed to mirror, in microcosm, the two-handed theory of Deleuze’s Cinema books, moving from a Movement Image (where acts have causes and effects) to, following the murder and payment for his father’s operation, a Time Image where, as Deleuze put it, ‘the link between man and the world is broken.’ However, the introduction of this classic moral act is a ‘re-linking’ that is effectively just a return to form, totally in keeping with the servile transactions that make up the rest of the film. Like his day job, like the murder, here is another delivery that Alex is the vehicle of without benefiting from — except this time he’s delivered himself.

An intriguing subplot in the film suggests that Alex’s aggressively impulsive cousin may have carried out a much more passionate, irrational murder and, it seems, may very well get away with it. Viewed in context, is this an argument that poor Alex’s moral conscience is out of place — and a positive handicap — in this heartless world, or rather that this particular form of conscience, itself a product of this world, is just one more mechanism for deferring Alex’s own desires and keeping him in check? Admittedly, the film is reserved enough to allow for the possibility that Stempkovsky shares some of our skepticism. But this ambiguity serves a function too.

Critic Michael Sicinski has succinctly pegged Soderbergh as ‘the paradigmatic auteur of economic neo-liberalism’, a technician more than a poet, who exemplifies ‘the unrootedness and lack of connection that the massive post-industrial shift in global economics has generated, in everyday life and all facets of culture.‘ Sicinski is talking here not just of Soderbergh’s chosen subjects but his whole cinematic approach: ‘The thing is sold, it moves, and it is essentially a blank. We can project transgressive tendencies, or conservative capitulation, onto that blank screen, because the important thing is that the commodity was assembled, shipped out, and consumed.’

Sicinski has since qualified that, yes, Soderbergh is ‘indeed “a filmmaker within neoliberalism”, but one with a set of deep critical insights regarding that system of exchange.’ But he’s also conceded such insights can, ‘in keeping with neo-liberal branding’, become ‘another auteurist mark of excellence that can just as easily be ignored by those whose feathers it might ruffle in a more unassimilable context.’

What would Badiou say? Probably something like… ‘Art can only be made today about what, for Communication (the medium and commerce), does not exist, or hardly exists.’ Stempkovsky, by taking us from a world of sales and deliveries to a world of guilt and repentance, seems to remain firmly in the realm of the existent, however skillfully he manages to trace its hollowness.

Everything Everywhere All at Once 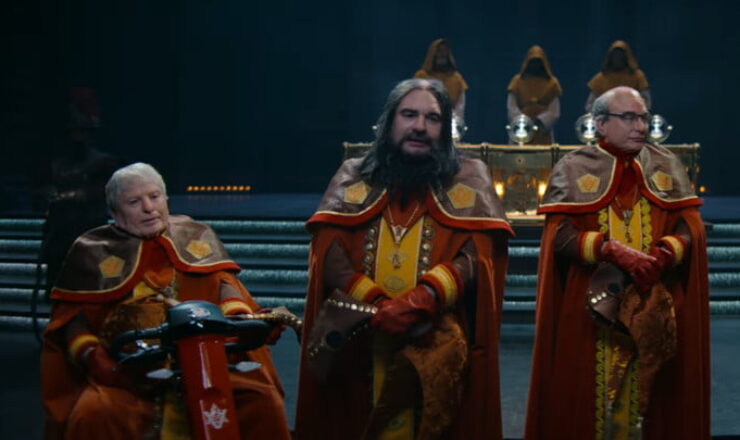