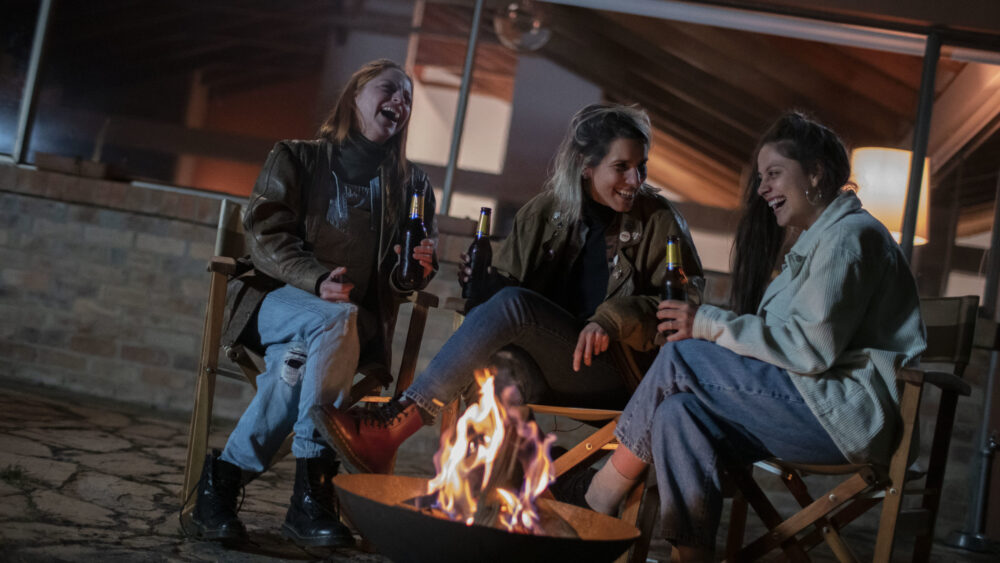 For the Tribeca festival’s return to a world that isn’t quite post-covid yet, movie theaters made a big comeback. This celebration of film as a shared communal rite in familiar spaces has taken two uncertain years to come to fruition. The New York City based festival skipped the 2020 edition and played out mostly in out-door spaces in 2021.

One major holdout from last year though has been the festival’s virtual screening platform, Tribeca at Home. This year, Tribeca at Home- which also doubles as the virtual press screening platform- houses a curated selection of 45 narrative films, documentaries, and shorts available exclusively online. In terms of quality, the films in the selection run the gamut from excellent to middling. Some of these films were making their world premieres, some their US debut.

Blessed Boys is among the latter. Debuting last year in the Biennale College of the Venice film festival under the title La Santa Piccola (The Miracle Child), director Silvia Brunelli’s imprecise but fun take on the outsize influence of Catholicism on a low-income community in Naples could be considered somewhat of a festival highlight.

The film follows the heartwarming relationship between two listless young men, Mario (Vincenzo Antonucci) and Lino (Francesco Pellegrino). Close enough to be considered kin in some way, the young men play soccer, attend sex clubs together, and aren’t shy of expressing their love. Trouble looms when Mario begins to develop romantic feelings for his best mate. These strange and perhaps unwanted feelings threaten the platonic ideal the young men have created amidst the lack and uncertainty around them.

Blessed Boys is not quite the straightforward coming-of-age story as it opens with a scene involving Lino’s little sister. One that is instantly interpreted by the ultra-religious community as a miracle. Brunelli thus spends a considerable part of the film’s running time weighing the pious against the profane. While hormones are raging on one end of the spectrum, the fires of fanaticism burn brightly elsewhere as Lino’s life is upended in ways perhaps too complicated for his eighteen-year self to grapple with.

Blessed Boys is a sexy dive into the muddy waters of identity, male sexuality, and toxic masculinity. Brunelli has some ideas about how religion connects with sexuality and how rigid performances of maleness can topple even the strongest of bonds created by chosen families.

The theme of unconventional families is continued in the Hindi international competition title, Two Sisters and a Husband. The film’s central drama is exactly what the title suggests. A man and his wife and her sister, who happens to be pregnant with his child have to work through an impossible situation while fleeing from society’s ever reliable judgement.

Shlok Sharma’s uneven third feature length wants to be both a quiet arthouse drama and a swinging Bollywood musical at the same time. But the filmmaker lacks the sensitivity to balance both worlds properly. The technicalities- picture, sound- are modest and the actors are game and remain committed to the plot’s wild swings and sloppy shocks but Sharma’s muddled messaging is a letdown.

The Viewpoints program is usually considered the festival’s home for discovering bold cinematic visions and innovative style. Petit Mal directed by Colombia-based Spanish director Ruth Caudeli is certainly forward thinking what with its uncompromising depiction of a romantic relationship comprised of three women.

Caudeli who has with her previous work (Eva + Candela, Second Star on the Right) staked a claim as a foremost chronicler of queer relationships, bases Petit Mal loosely on her own real experiences. She plays one third of a throuple who find their unconventional but passionate relationship severely tested when one of the ladies has to go away for a period of time.

Blending documentary, portrait photography and semi-autobiographical fiction, the film is a unique portrait that teases out a unique connection between its female protagonists; the ebbs and flow of their lives and the ways that their dynamic is affected by both distance and time.

Formally adventurous and carrying a contagious inquisitiveness about the flexible nature of the human heart, Petit Mal is a rambling chronicle that eventually seduces audiences willing to submit to the experience. Caudeli isn’t exactly reinventing the wheel in terms of the tools and the choices she makes, but she is adapting them towards a lived experience that feels fresh and authentic even when it is obviously manufactured.