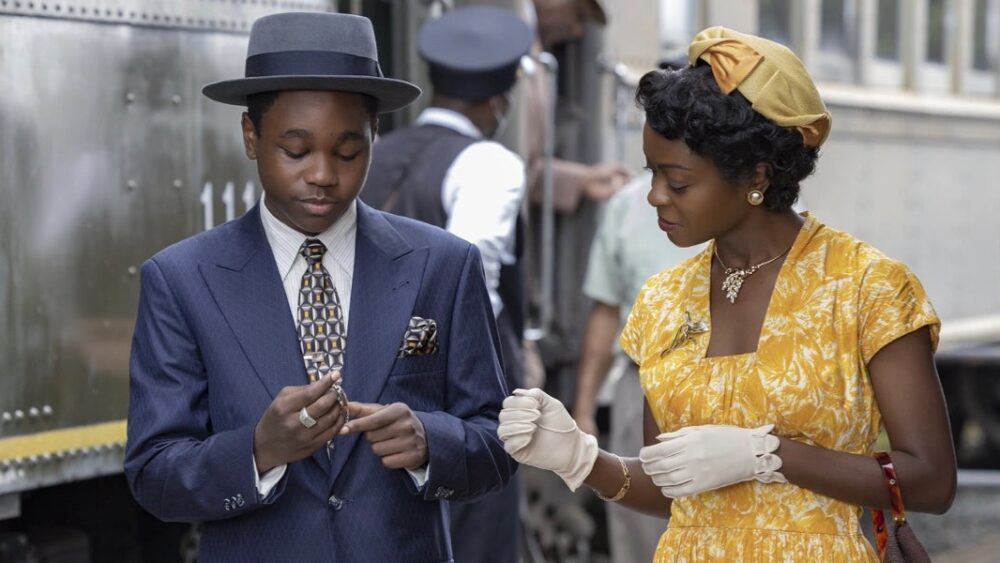 In Till, the sophomore feature by American director Chinonye Chukwu (Clemency), which just scored its world premiere at the New York Film Festival, history and activism collide in a lovingly rendered if staid account of one of America’s darkest chapters.

Till which stars Danielle Deadwyler (The Harder They Fall) as the moral and emotional center, adapts the tragic true story of Emmett Till, a 14-year-old boy from Chicago. Till (Jalyn Hall) was lynched for the mortal sin of apparent flirting with a white woman, Carolyn Bryant (Haley Bennett) while visiting relatives in segregated 1955 Mississippi. Accounts of their interaction remain contested and for Till, Chukwu pulls from several sources that coalesces into an excited Emmet Till, comparing Bryant to a movie star’s photo which he carries in his wallet and whistling at her.

What follows next is now the stuff of history. Till is taken from his uncle’s home by a mob led by Bryant’s husband and his half-brother and is never seen alive. His body, disfigured beyond recognition and identifiable only by the ring he had on is later found and dispatched to his mother who insists on an open casket viewing, all the better to make the country face up to its crimes against her family. The gruesome photographs, displayed on the cover of Jet magazine contributed largely to galvanising the civil rights movement. It wasn’t enough to stop the jury though from rewarding Till’s murderers with a not guilty verdict. Both men would eventually sell their confession to the tabloids after the sham of a trial.

Chukwu frames Till respectfully in the image of Mamie Till-Mobley, the young mother who loses her only child in the most gruesome of ways but has to find the dignity and fortitude to not only mourn him but ensure that the perpetrators are brought to book and his legacy is carried on to something bigger. Because of Mamie Till-Mobley’s actions, a federal anti-lynching law, long delayed by squabbling politicians and named after Emmett Till, was finally passed sixty-seven years later, in 2022.

To underscore the gravity of Chukwu’s film and the moment which it arrives in, the New York film festival hosted over 1000 high school students to a special screening of Till introduced by New York City mayor, Eric Adams- a former cop himself-who described his own childhood experience as a victim of police brutality.

Under the guidance of Chukwu- who with two films has sparked a reputation for doing miraculous work with actors- Deadwyler turns in a wounded, forceful performance that is Till’s primary calling card. Even when the rest of the film sags and despite Chukwu’s efforts to animate the standard historical drama, Deadwyler is never less than arresting. With a quiver of the lips, a soulful glance and the full-on meltdown, she delivers one of the most indelible performances of the year.

In conversation with Till is another festival world premiere, Is That Black Enough for You?!? directed by veteran critic and first time filmmaker Elvis Mitchell. This documentary which arrives Netflix in November is a revealing and far-reaching essayistic document that chronicles the history of Black film in America and traces the connections and debts that mainstream Hollywood filmmaking owes to Black cinema.

With unlikely collaborators like Steven Soderbergh and David Fincher as producers, as well as talking head contributions from everyone from Harry Belafonte, Whoopi Goldberg and Zendaya, the scholarly Mitchell- who writes, narrates and directs the film- collapses decades of history into this dense package that seeks to contextualize and revisit the contributions and significance of African American storytelling in film.

Mitchell is particularly interested in the era that span from 1968 to 1978 which he advocates personally as the actual greatest decade in American cinema because of the diverse and wide-ranging forms of representation and opportunities that blossomed in that period for Black storytellers. While some of these films were one off events, never to be repeated, others saw success enough that led to even more opportunities.

Blaxploitation is the convenient- and dismissive- term often used to describe the majority of the output from this period but with his film, Mitchell sets about recontextualizing this era of peak African American cinema as well as the social, structural and racial dynamics that led to a somewhat parallel industry. One that provided representation and means of livelihood for talented performers where the mainstream studios had failed. With the truncated careers of Belafonte, Diana Sands and Rupert Crosse, Mitchell rues the possibilities that could have emerged were Hollywood more inclusive. But he also pays plenty respect to what did happen, giving films like Gordon Parks’ Super Fly, Charles Burnett’s Killer of Sheep and Ossie Davis’ Cotton Comes to Harlem their proper due.

If enough effort has been put into separating Black films from the canon, with Is That Black Enough for You?!?, Mitchell does a fine job of writing them back in, arguing less with emotions and more with calculated logic and sweeping analysis. Watching his film is an education.