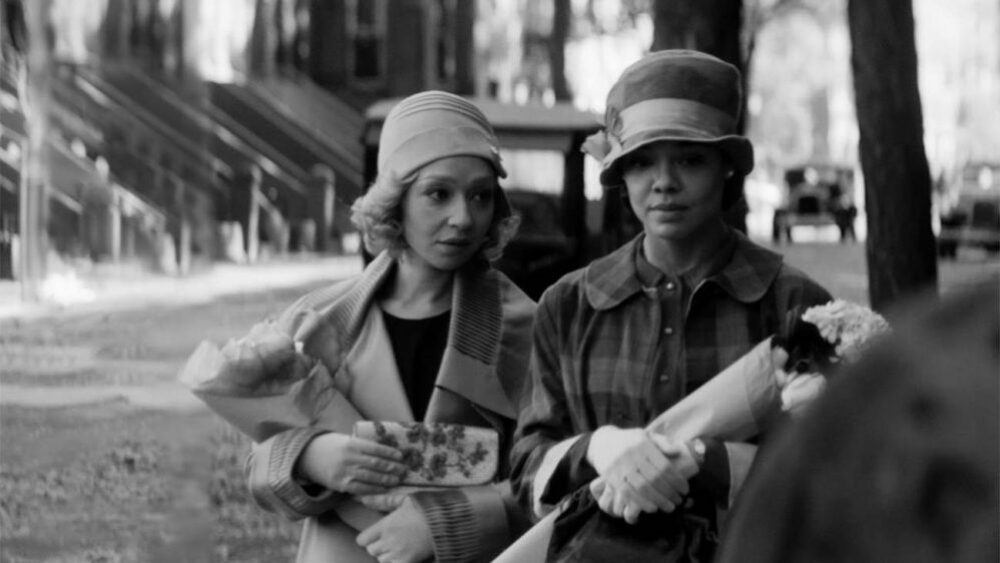 Three films by first time directors who happen to be women – two of them actors also – explore identity and the lengths people go to belong.

In Passing, Rebecca Hall’s arresting directorial debut, two Black women, both light-skinned, collide in an upscale New York City hotel. The circumstances of their reunion are strange. In that moment, both women are “passing,” the term used to describe the act of pretending to be white in other to assimilate into privilege. The difference is that one of them has chosen to live like this permanently.

Irene (Tessa Thompson in a precise, melancholic performance) is about to go back home in Harlem to her Black doctor husband (Andre Holland) and their two kids. Clare (Ruth Negga, dazzling and vivacious) is visiting the city alongside her racist, white husband from Chicago. Clare has managed to convince her husband and everyone around her that she is white.

This chance encounter with Irene and the discussion that follows sparks a reawakening within Clare. Giving in to the thrill of “what if?” Clare longs to reconnect with the parts of herself she had stowed away in order to live a life of economic and social privilege. She ingratiates herself into Irene’s family and social circle and enters a whirlwind adventure that is as liberating for her as it is foreboding.

Clare isn’t the only one left unmoored by that meeting though. Drawn to the other woman’s lust for life and her passions, Irene begins to question her privileged existence as well as the life choices she has made for herself.

Adapted lovingly and with some amount of reverence by Hall from a 1938 novella by Nella Larsen, Passing is at once a provocative snapshot of race relations, female friendships and sexuality in a deeply divided America. Intimately observed and drawn down to the minutest detail, Passing is strikingly lensed by Eduard Grau. The choice of monochrome isn’t an idle one as it gives the story fluidity and weight, contributing an extra layer to the film’s intersectional observation of race, gender, class and sexuality. The tension between Irene and Clare is sizzling as it speaks of a longing that Hall and her actresses draw out as ambiguously as they can.

When a country – or society – organizes around race and deploys skin color as a crux to distribute resources and discriminate, the implications are immense, complex and multi-generational, coalescing around both macro and micro levels. Passing does not cover all of these traumas – and indeed does not seek out to – but Hall’s film delicately yet unflinchingly interrogates this order and considers the repercussions as it concerns the lead characters and the people in their orbit.

The film poses tough questions on identity and belonging. Who gets to belong? How should they present? And what lengths must they go to claim membership? In tackling these themes, Passing does share some kinship with the 1975 drama Hester Street, which had a new 4K restoration screening in the festival as part of the Revivals program.

Directed by Joan Micklin Silver, Hester Street is considered one of the finest portraits of Jewish life in America and it holds up quite charmingly. Based on a 1896 novella, Yekl: A Tale of the New York Ghetto by Abraham Cahan, Hester Street is the tale of a young Eastern-European Jewish couple who arrive New York’s Lower East Side in the late 19th century.

Yankel (Steven Keats) takes to his newfound country like moth to a flame, making every determined effort to strip himself of his Jewish identity in order to find advancement. Becoming American he soon finds is an intoxicating pull that exacts a terrifying price, one that may be too steep for his wife, Gitl (Carol Kane).

Less successful at playing the assimilation game, Gitl struggles to find her footing in her new country. The conflict of Hester Street lies in how this couple navigates the realities of living in their new country, as Micklin Silver tests for how much of their old lives they are willing – or allowed – to bring over. America is a tantalizing secondary character in Hester Street, providing modernization and opportunities anew but also demanding some personal sacrifice.

Belonging, but of a different, more introspective kind is also a preoccupation of The Lost Daughter, yet another remarkable debut film adapted by a first-time female director from an acclaimed novella. Actress turned filmmaker Maggie Gyllenhaal is in inspired, eloquent form as she distills the essence of Elena Ferrante’s 2008 text into an arresting adaptation that centers the female gaze – and experience.

This gaze for the most part is trained on Olivia Colman as her character, Leda, a languages professor embarks on a working vacation in an idyllic Greek island. Gyllenhaal is completely trustful of her lead’s quiet but powerful presence as some of the early scenes of The Lost Daughter are composed of Colman lounging by the sea, doing little but observing the world around her.

When Leda crashes reluctantly into a younger woman (Dakota Fanning) vacationing with her family, the events that follow lead her on a necessary journey to self. Past traumas are dredged up and Colman working with costar Jessie Buckley – who plays her character’s younger self – and Gyllenhaal work together to subvert the idea of womanhood as the ultimate act of sacrifice.

A woman is often socialized to believe that she belongs to everyone else – family, husband, children, lover – but herself. The Lost Daughter makes a case for Leda choosing herself and working through the consequences in her own time. Is this the ultimate betrayal of womanhood? Perhaps. But who makes these rules anyway?