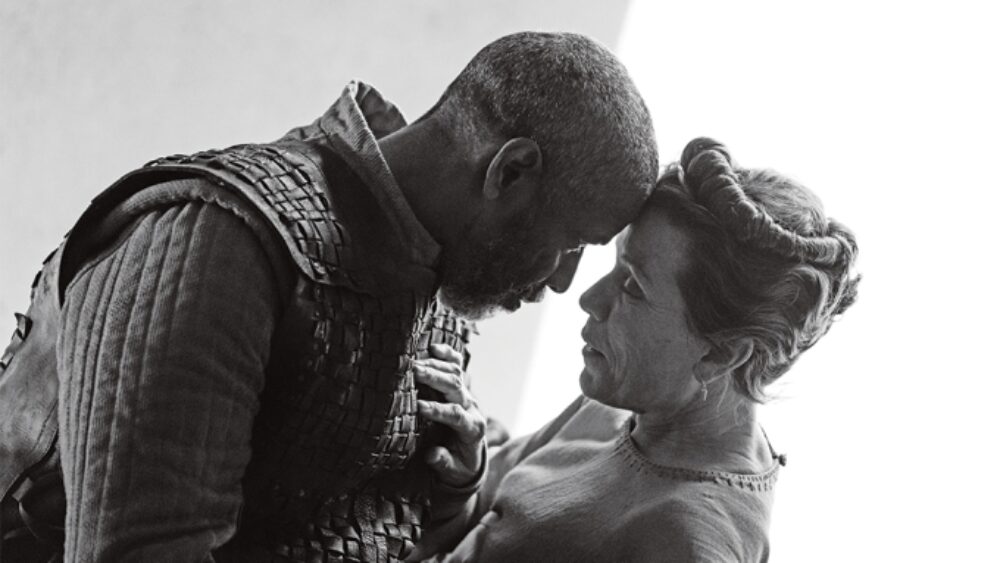 The Tragedy of MacBeth

The New York Film Festival returns to a physical format this year, opening with The Tragedy of Macbeth, the latest high-profile interpretation of William Shakespeare’s enduring Scottish saga. Adapted for the big screen – or the small, as the film will eventually land on Apple TV+ in December – by Joel Coen, The Tragedy of Macbeth marks Joel Coen’s first directing outing without his brother and creative partner Ethan.

Coen isn’t exactly going it alone though as he is joined by his life partner and regular collaborator Frances McDormand. Fresh off Oscar success for starring in and producing last year’s Nomadland, McDormand who has also appeared in some of the Coen brothers’ most memorable turns (Blood Simple; Fargo; Burn After Reading) retains double responsibilities on this project, working as producer and starring as Lady Macbeth. For the Thane of Cawdor himself, Coen enlists the gigantic talents of Denzel Washington whose muscular, volcanic interpretation of the character puts a significant stamp on the material.

As stage to screen translations go, Macbeth – one of Shakespeare’s mightiest plays – with its high drama, chunky monologues and glorious tragedy remains tricky. Yet it is for these reasons that the filmed version has remained an enticing prospect for everyone from Laurence Olivier to Orson Welles and Akira Kurosawa. Underneath the knotty language, lies a complex and timeless account of obsession, madness and the seductive nature of evil.

The first concern for any filmmaker looking to adapt Shakespeare would be finding a gateway to opening the text up to the screen. Coen does a U-turn though and moves as far away from the last major big screen adaptation, 2015’s bloody and realism-tinged Macbeth directed by Justin Kurzel.

Coen appreciates Macbeth as a play first and foremost and fully leans into this, filming The Tragedy of Macbeth as theater, but for film, one directed by a Coen brother no less. This means creating stunning visual motifs presented through the lens of Bruno Delbonnel (Inside Llewyn Davies; Amélie) whose magnificent work here using expressionist lighting and foggy fields of vision in the square Academy aspect ratio is quite possibly the finest work of an already impressive career.

Inspired by the films of Carl Dreyer, F.W. Murnau and Ingmar Bergman, Coen’s interpretation is insular, contained in space and time within a Los Angeles soundstage that morphs as easily into grand castles as it does lush forests and foreboding hellscapes. This version is at once stripped down yet grandiose, boasting impeccable sound design that ratchets up the suspense. Coen cuts out the fat, assuming some audience familiarity with details of the play. At a tidy 105 minutes, the film works as a lean dramatic thriller, moving briskly through plot beats and ultimately sacrificing emotional connection for visual opulence.

Washington and McDormand are in terrific actorly form calibrating their performances to match Coen’s mood, one that ranges from noir thriller to existential horror. With both performers presently in their sixties, there is a renewed urgency to their casting. They play the scheming couple as fading lions in the winter of their lives, hoping for one last murderous grab at power flowing from a lifetime of playing by the rules.

Kurzel placed the couple’s childlessness at the center of his Macbeth adaptation but not so for Coen who skimps through any beats involving filial dynamics. When he concedes to let in children, he is less inclined to engage with the repercussions, keeping the film ultimately at a clinical distance.

Thankfully, there are films elsewhere in the festival’s Main Slate section that engage more meaningfully with the interior lives of children. Mexican-Salvadorian documentarian Tatiana Huezo makes her feature-length debut with the powerful Prayers for the Stolen (Noche de fuego). Loosely adapted from Jennifer Clement’s 2004 novel of the same title, Huezo’s film tells the story of women and girls caught in the crossfire when their village falls to Mexico’s notorious drug cartels.

Prayers for the Stolen may be fiction but it continues Huezo’s established interests in documenting the scourge and trauma of human trafficking in Mexico. Huezo approaches the story with a creative documentarist’s eye. Her film is about a community navigating traumatic circumstances but the emotional core is the coming-of-age story at its center involving a trio of girl children who manage to snatch some semblance of normalcy from the violence. Huezo isn’t the kind of filmmaker to give in to sentimental choices though. Despite the beauty of the natural environment and the gracefulness of the images, the film is unflinching about the dangerous realities of living in these occupied communities, particularly for young girls.

Three of Italy’s most promising contemporary voices, Pietro Marcello (Martin Eden), Francesco Munzi (Black Souls) and Alice Rohrwacher (Happy as Lazzaro) come together on Futura, a piercing investigation of youth in crisis. Travelling across Italy as the country battled the covid-19 pandemic, the three directors organized several sessions with a host of young people and got them to speak freely about their dreams, anxieties, worries and expectations. Their worries range from the progressive (social justice, climate change) to the basic (economic inequality, jobs) and they have their own ideas of how to bring about more favourable outcomes. Consisting primarily of footage of young people engaging with the camera and with themselves, Futura is a potent snapshot of a country as observed by the future generation.