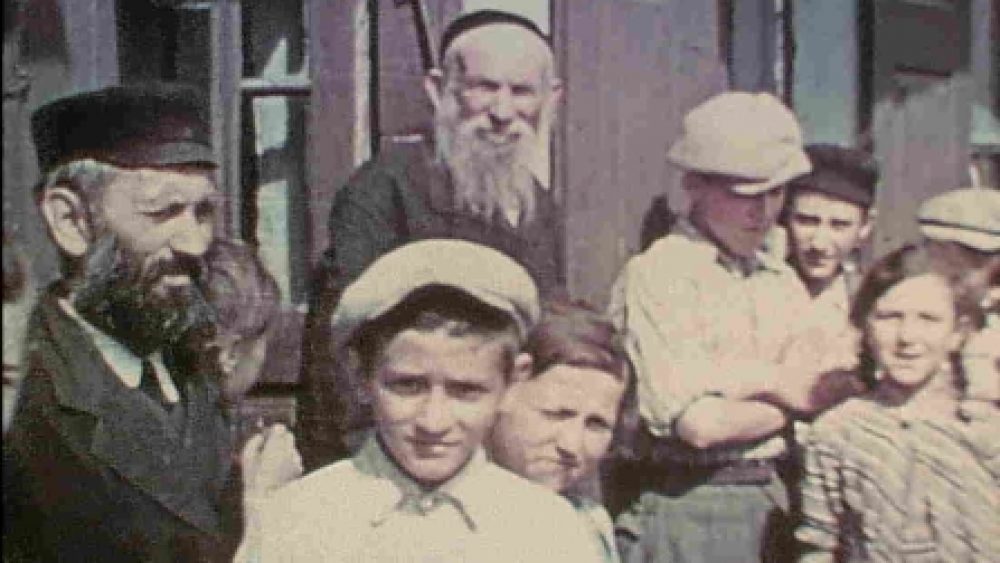 It is Thursday the fourth of August 1938. A black sedan drives five Americans to the small town of Nasielsk, 30 miles north of Warsaw. One of the travellers, David Kurtz, has a camera with him. He films three minutes in the town he was born in. Seventy-five years later, the images he shot, in black and white and in colour, are the only moving images left of the Jewish inhabitants of Nasielsk prior to their destruction. Of the 3000 Jewish Nasielskers only 100 survived the Holocaust.

Is three minutes a lot or a little? A split second was enough for a woman to recognize her grandfather as a young boy in the film, and it took a few years to research all those seconds. The home movie of David Kurtz is now the subject of a book by his grandson, writer Glenn Kurtz, and three minutes can become a lot if you research them thoroughly. Three Minutes in Poland. Discovering a Lost World in a 1938 Family Film is the moving result that changes a mere travel souvenir into a rich historical treasure trove. Three minutes of footage that offers a glimpse into a lost world.

David Kurtz shot it in 1938 on a holiday trip to Europe. Kurtz went to familiar touristic destinations, including Volendam and the south of France. But he also visited the small town he was born in before immigrating to America as a child. The footage he filmed in Nasielsk contains no extraordinary images. We mostly see people looking and waving at the camera, as was still common in those days in most places. Being filmed was a new experience. Not what you see, but what you know is what makes these images extraordinary when you look at them now as past, present and future get tangled. Major and minor become fluctuated. In David Kurtz’ home movie, film regains its original magic, of capturing the present in a way which lets it refuse to completely become the past.

Bianca Stigter writes essays about art, cinema and culture that are published in Per ongeluk expres, De ontsproten Picasso en Goud uit stro. De ontsproten Picasso was nominated for the AKO Literatuurprijs 2008, Per Ongeluk Expres for the Halewijnprijs 2014. On stage her essays were presented in ‘Lady Mondegreen Live’ en ‘De per ongeluk Expres’, two ‘disrupting events’ about art, chance and coincidence Stigter curated for the SLAA . About Amsterdam during World War II she published the ‘travel guide’ De bezette stad. Plattegrond van Amsterdam 1940-1945 that has become a classic. Stigter studied History at the University of Amsterdam and is contributing editor of NRC Handelsblad.

When I heard about the book Three minutes in Poland and saw the footage on the website of the Holocaust Memorial Museum in Washington, this was the first thing that came into my mind: would it be possible to somehow extend the footage David Kurtz shot in Nasielsk in 1938. We see life, three ordinary, glorious minutes of it, and than suddenly everything is gone. There are no more images. This is all there is. After reading the book the idea stayed with me. Could we lengthen the film? Could we keep the people in it in the present for longer? The detailed information Glenn Kurtz provides in his book made it possible to try. Can three minutes become thirteen minutes or even thirty?