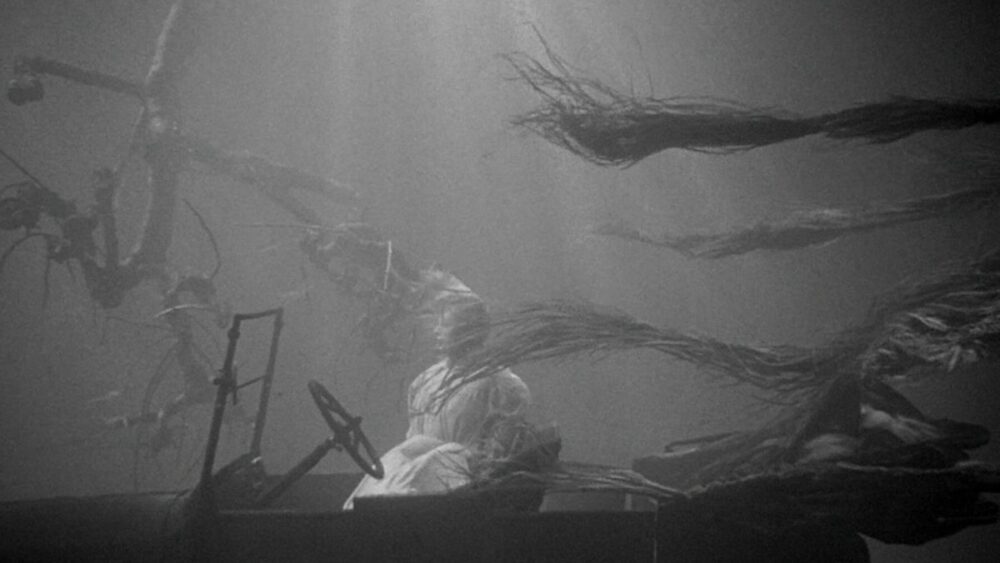 The Night of the Hunter

From July 1 through AUgust 25, Eye Filmmuseum in Amsterdam welcomes you to dive into a brooding genre that has been fascinating cinephiles for generations. Adrian Martin encourages us to keep an eye on the lesser-known nooks and crannies of the genre.

“Film culture got hooked on film noir the way the Papuans got hooked on the cargo cult”. This wonderfully cranky remark by Jean-Pierre Gorin captures something that is very real and true about this strange, evanescent, and yet ubiquitous movie genre.

Let’s remind ourselves of the historic reference: various native cultures of Melanesia were affected by the two World Wars and the sudden spectacle of soldiers arriving from the sky and bringing their precious goods (cargo) with them. After the armies’ equally sudden departure, some indigenous people began performing rituals in the hope of encouraging the return of this technological bounty.

So, film noir is also something glimpsed, lost, and then nostalgically re-invoked. It is reinvented as a myth, an image, an ideal – just like those other classic American genres, the Western or screwball comedy. To make matters even more complicated, however, some critics swear blind that (unlike those other genres) film noir never really existed – nobody strolled around Hollywood in 1945 saying either “I just saw a great noir!” or “I’m shooting a new noir next week!”

To speak the truth, film noir is a genre named and collated after the fact – by encyclopedic critics and obsessed fans. It was a retrospective, partly imaginary process beginning in the late 1960s, cemented in the minds of eager audiences via the neo-noir wave of the 1970s in everything from Klute (1971) to lavish TV commercials for perfume. Cue the lighting through Venetian blinds, the sexy saxophones, the men in trench coats, the blonde femmes fatales, and the pouring rain!

Of course, from another angle, the classic period of film noir (usually dated 1942 to 1958) clearly does exist, and it also appears to be very coherent as a group-style: it has an evident look (borrowed from German expressionism), a familiar content (mysterious, labyrinthine crime networks), a heavy mood (fatalism), characteristic stars (Humphrey Bogart, Ava Gardner, Robert Mitchum, Rita Hayworth) … what more do we need?

But one need only glance at a founding text of appreciation of this genre – A Panorama of American Film Noir (1955) by Raymond Borde & Étienne Chaumeton – to see that noir is, at its very core, a mish-mash of modes and influences: they list as its key sources not only the old reliables like “literature and psychoanalysis” and gangster movies, but also “horror films and cartoons”! And indeed, everything washes into noir even during its classic period, from melodrama (Caught, 1949) and Southern Gothic (The Night of the Hunter, 1955) to the Western (Bad Day at Black Rock, 1955) and psychological chamber drama (In a Lonely Place, 1950).

Now we have a new opportunity to explore the beguiling edges of this phantom form, the points where it dissolves into unusual, hybrid constellations. Film noir has an eternally appealing core, as the Eye Filmmuseum program well shows – but its less recognised peripheral zones are just as intriguing. Here are a few to look out for.

Surreal Sadism
In A Panorama, Borde & Chaumeton celebrate something that may seem politically incorrect (hooray!) today: “an unprecedented panoply of cruelties and sufferings”. They love the deformed and obese bodies, the vicious injuries by acid, the slashings by razor … not in a spectacular, pre-Tarantino way, but because it’s all so poetic! Remember the fine surrealist motto: “Beauty will be convulsive, or not at all” – and noir can show you the path back to such magnificent convulsion. Some especially perverse examples: The Prowler (1951), The Big Heat (1953), House of Bamboo (1955) and, in neo-noir mode, Basic Instinct (1992).

The Everyday
One appealing subterranean aspect of noir, especially in its French variant (see Pepe le Moko [1937], Du Rififi chez les hommes [1955] and Ascenseur pour l’échafaud [1958]) is its emphasis on everyday chores and routines – even theft, finally, is just work!

The Mundane City
There are many good books on this genre, but my favourite is Edward Dimendberg’s Film Noir and the Spaces of Modernity (Harvard University Press, 2004). It urges you to look away from Blakean visions of the industrial metropolis as Hell. Instead, concentrate on what is mundane: the changing urban (and suburban) landscape of roads, highways, gas stations, diners, traffic signs – all thoroughly documentary indices of a post-World War II sprawling-out city in the fearful age of nuclear power. See Ida Lupino’s The Hitch-Hiker (1953) for a classic example, and Michael Mann’s Collateral (2004) for an update to the era of digital surveillance.