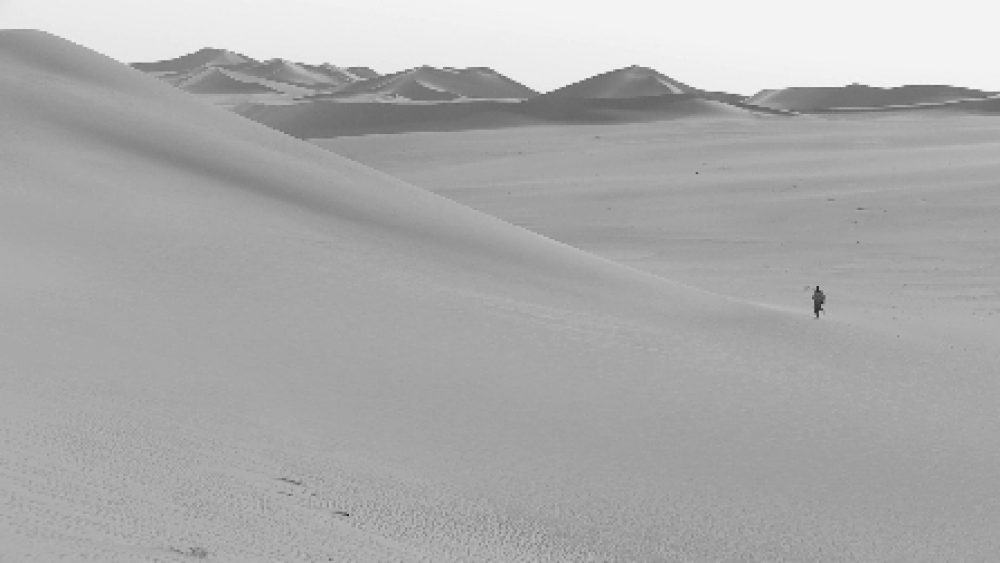 Adrian Martin checks in from Melbourne to report on Fata morgana, and finds that the plotless Austrian film completely betrayes his cognitive apparatus.

Two spaces, mainly. First, a house, arranged in two ‘wings’ or rows — is it some now unused hotel? — with green trees (seen through black-and-white) visible out a window. Some shots of a river, possibly in the same general area. Second, a desert — sand, a distant horizon, rocks, stretching on forever.

If you stay to the end credits, to the 140th minute of Peter Schreiner’s Fata morgana — and many viewers will not — you will learn that there are two shooting locations: Lausitz in Germany in the Sahara in Libya. Which explains something about the making of the work, but nothing about the work itself.

As you watch it, the film is a puzzle — but not one that is wanting you to provide a solution. Whenever any movie goes back and forth between locations as starkly different as these, the viewer’s brain tends to a) pull them all together (no matter the logical or logistical difficulty) into one imaginary space or place; or b) try to construe a narrative trajectory: that there are various people in separate geographic spots, but somehow they are all going to meet up, and the dots between the places can then be joined up into lines.

I managed to perform both these mental operations, casually and pretty unconsciously, as I watched Fata morgana. I started seeing — hallucinating — the single, continuous space of a ‘house by the desert’ (in homage to Fritz Lang’s House by the River, 1950), especially as the two people we see in and around the house (more about them in a moment) are also seen walking, sleeping and talking in the desert sands. And there is something cinema-based, as well as reality-based, in this propensity: namely, that a fata morgana is itself an elaborate desert apparition, what is nicely called a superior mirage that forms on the hot, empty horizon. An imitation of life.

I also was ‘thrown’ — or led — by the opening scene: three people in a desert, one of them (is it, in fact, director Schreiner? Another source tells me it’s Awad Elkish) pontificating, mock-pretentiously, on the need to "find a point of reference… an inner stability." Because I could not yet identify any of these figures as full-blown ‘characters’ in the film to follow, I took this trio to be some autonomous grouping, out in a desert… and on their way to an encounter (momentous or deflating) with the couple in the house.

Knowing from the first frame that it was a minimalist movie in the lineage of Albert Serra, I predicted — projected — that it would not be until the 70-minute mark that such an encounter actually began to manifest itself: mid-way breaks like this are as popular in art films as in Hollywood blockbusters these days. And at the 70-minute mark, there did seem to be some stirrings of change in the generally monotonous, non-action-based unfolding: a third person, more emphasis on the desert. But here my cognitive apparatus proved to have completely betrayed me. No plot is forthcoming in Fata morgana.

Schreiner’s crypto-poetic statement on the sixpack website includes the line: ‘My life is like a house on the fringe of the desert where I feel both secure and shut in’. ?So this house-by-the-desert business is his personal fata morgana, too. It is also, evidently, some kind of mental projection — some kind of interiority made exterior. As it seems to be for the two central ‘players’ of the work, Giuliana Pachner and Christian Schmidt. (A little rummaging in the sixpack site also revealed that a 2006 Schreiner 35mm film, Bellavista, was a previous, 2-hour exploration of Pachner in what might be this same, odd hotel with two wings in Lausitz.) They speak of the desert a lot. Or rather, they speak of silence, stasis, a draining away, the end of all thinking… which, in this context, amounts to the same thing as the desert, the image/symbol/figure/metaphor of the desert.

I thought of the sand dunes (overdubbed with jazz music) that form mysterious interludes or punctuations in Pasolini’s Teorema (1968). Eventually, one of PPP’s characters will indeed have his naked, insane, screaming rendez-vous with this elemental desert. But is it really a narrative destination? Is this desert all around, or is it in his head? (Happy 66th Birthday, David Bowie.) It’s not really a place he could have just driven to. It’s always been within him, within us, within the film. And within the medium, too: cinema loves these deserts in which it disappears, is dissolved, expelled. As a filmmaker (David Lean or Lisandro Alonso, it doesn’t matter), you want these images, but these images don’t want you: the desert abhors mise-en-scène and fiction alike. And this dusty wave of non-love coming off the desert plain is really quite an attraction. A masochistic attraction. Marlene knew it when she kicked off her high heels and strode out across the sands for Gary Cooper in Morocco (1930), and Sternberg knew it when he ended that film on the dispersing void of particles and the whistling wind (especially poignant in crumbling old 16mm prints)…

Fata morgana: two people, a man and woman. I thought of the eternally-against-it, equally unglamorous couple of Hail (2011), and of Alain Badiou’s recent declaration that, since absolutely everybody yearns for it and experiences it, love is among the only, the very few, universals. On the other hand: Schreiner’s notes assure us that ‘no love story will come out of it. And yet it may’. But when? Like in the snowbound retreat of Philippe Grandrieux’s Un lac (2008), we would be silly to ask questions about how these flesh-and-blood, ageing phantoms manage to eat, pay bills, or take a shower. The things that Pachner and Schmidt say to one another (or sometimes just to themselves) in this film, if you pluck them out and string them together, could have been uttered 50 years ago, as the robotic stutterings of an involuntary Surrealist poetry, by Lemmy Caution and Natasha Von Braun: The turning into stones of our emotions … Forgotten and abandoned at the same time … We find ourselves in a vacuum of time … You must have the courage to stand this stillness … I’m fascinated and completely worn out … When I open the lid, pain and death escape from it … Death and blood and a shot … Anything but our thoughts … To quit thinking … Every day we are doubtful about ourselves … Writing one’s name on a wall to leave a trace of one’s existence … and pass on a despair … How heavy is lightness? What does up and down actually mean? That is just a small selection.

But this is not Alphaville (1965) the film, or even Alphaville the place. Even sympathetic spectators will experience these solemnly uttered statements as lethal boomerangs back onto Fata Morgana itself; and very likely Schreiner himself (as that strange prologue indicated) welcomes, and indeed programmed, this kind of reflexive irony. A typical artworld endgame manoeuvre, although the director’s notes suggest that he has loftier things on his mind. The transmission of such things, in the public forum of cinema (and especially during a film festival) is always fragile.

It’s a murky film, as feature-length avant-garde experiments, high on texture and low on plot, can sometimes be. It doesn’t have the crystalline clarity of a Chantal Akerman non-fiction such as D’est (1993); but, then again, few films (of any sort) have that. There is a scene of sudden rain, crisp and real. There is a camera: it pans super-slowly, left or right, and on its brutal path creates a hundred different, sometimes arresting deframings (at moments reminiscent of Stephen Dwoskin’s great testament Age Is…): stray ears, hair clumps, shoulders become as prominent and important as eyes and mouths and faces. The human is always decentred; yet, because it has leaked out into the imaginary desert of cinema, the human is everywhere, uncomfortably, stuck like grout between the frames, decaying and stinking before our eyes. There are landscape shots that achieve such stillness that you take them, for a while, as freeze-frames, but they are not: Schreiner has really found these places where nothing, nothing at all, moves. Not even the wind in the sands, not even the grain of the image. Absolute zero point.

Adrian Martin has contributed the World Wide Angle column to Filmkrant since 2007, and is the Co-Editor of LOLA, now at its 3rd issue: ‘Masks’. 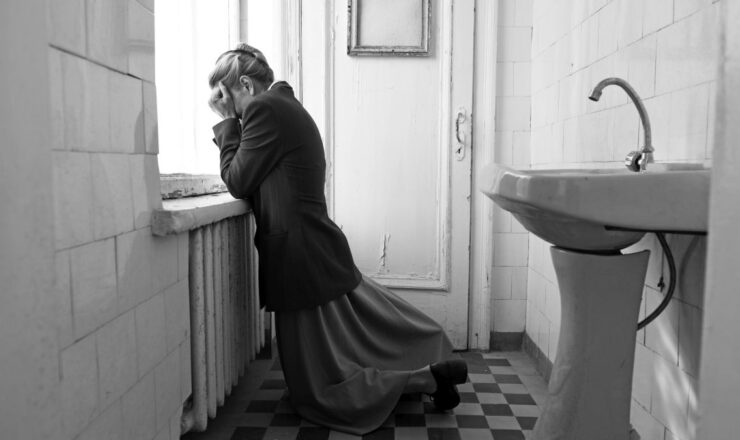 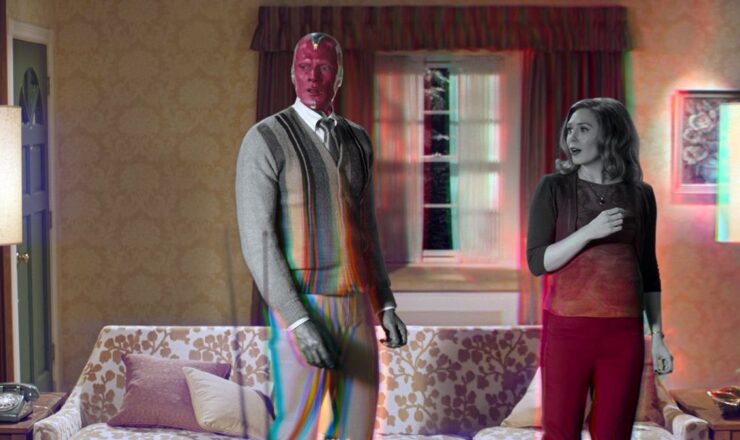